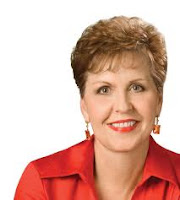 Over the past few months, I've been listening a little to Christian author & teacher Joyce Meyer (don't ask, it's a long story).  If, per chance, you don't know who she is I should mention, before I go much further, that Meyer is one of the most popular evangelical leaders alive today.  Time Magazine once named her one of the "25 Most Influential Evangelicals in America".  I knew who she was, while I was a Christian, but (ironically) I have become much more familiar with her work just recently.

The other day I heard Meyer say something that really caught my attention (although probably not for the reasons she had in mind).  Here are her exact words...

"Well, you know, the longer we complain about our problems the longer we're going to keep those problems.  The Israelites came out of Egypt, they had prayed for God to deliver them.  He sent them a deliverer, in Moses, he led them out of Egypt and they headed toward the promised land. The Bible says that they spent 40 years trying to make what was an 11 day journey.  I don't think I'll ever stop being amazed about that.  We can read about their story, and be amazed, and say well how dumb they were but I wonder how many of us do the same things.  We go around and around the same mountains, we keep dealing with the same problems, and why?  Is it just the devil, is it just our enemies?  Actually, if you study the Israelites journey it was their attitude that kept them in the wilderness.  They complained, and murmured, and grumbled, and found fault, with every little inconvenience.  And I believe with all of my heart, that if we complain, we remain, but if we praise God will deliver us."  (bolding mine)

There are several things that strike me about the above paragraph.  The first is more of a general observation about Meyer; namely that she is basically just a glorified motivational speaker (and a good one at that).  Nearly all of her talks are very similar, in tone, to the snippet that I've just shared with you.  Step 1, highlight a problem that we all struggle with from time to time (some of her favorite themes are controlling the tongue, and having a good attitude), step 2, tie it in with a Bible verse and/or Bible story, step 3, draw out a life principle that is designed to motivate better behavior in the recipient (sometimes step 1 and step 2 are reversed).

And, during each talk, she checks in periodically to be sure the audience is still engaged emotionally with what she's trying to get across; something like, "come on now, I'm preaching good tonight!" (I'm paraphrasing this part, but you get the idea.)

Another thing that really jumps out at me, from Meyer's comments above, is how "amazed" she was that the Israelites took 40 years to make (what should have been) an 11 day journey.  Really Joyce?  Does that sound credible to you??  She then goes on to strongly imply that she has "studied" the matter.  Again...really??

If Joyce Meyer had "studied" the Exodus story, than she would be fully aware of the fact that most scholars believe it didn't happen as described in the Bible.  Actually, a simple check on Wikipedia would suffice to establish this point...

"The archaeological evidence of the largely indigenous origins of Israel is 'overwhelming' and leaves no room for an Exodus from Egypt or a 40-year pilgrimage through the Sinai wilderness.'  For this reason, most archaeologists have abandoned the archaeological investigation of Moses and Exodus as a 'fruitless pursuit'."  (bolding mine)

I'm not trying to pick on Joyce Meyer here.  She seems like a nice person and, in so far as I can tell, extremely sincere in her efforts to help people.  I only bring this up because, in my opinion, it's indicative of a much deeper problem that completely pervades evangelical Christian culture. The problem I speak of is twofold; a) confirmation bias, combined with generous doses of, b) credulity.  Each of these is problematic, in its own right, but together the two are nothing short of a potent mix.

I've written a little about confirmation bias already, in discussing my father, but lately I've begun to see that it's an even bigger issue than I had previously realized or acknowledged.  When Joyce says that she "studied", for example, what precisely does she mean by that?  Well, of course, we can't be certain (because she didn't tell us).  At the risk of being presumptive though, I suspect that Meyer simply means that she has read some Christian books & commentaries on the Exodus story.  To be clear, there's nothing wrong with that.  But, has she also read literally anything that examines the story from a non-evangelical Christian perspective (ie. best selling book "The Bible Unearthed")?  Probably not.  And, if she has, than one could reasonably expect her to have at least a few qualms about the legitimacy of the story as told in the Bible (which she clearly doesn't).  That is, unless she would just reject the possibility of Biblical error out of hand anyway, in spite of the evidence (which, I'll admit, is also a distinct possibility).

As I see it, a second prong of this same problem is credulity.  Look again at her words, "the Bible says they spent 40 years trying to make what was an 11 day journey".  Wow, it really takes some serious moxie to believe that as pure fact...much less to preach it as such in front of packed stadiums (and with such confidence)!  And all of this without the tiniest shred of archaeological evidence to back up the claim.  Oh, wait, I forgot...it has to be true because it's in the Bible, and the Bible is "God's perfect word".

Did I mention she had "studied" the matter?

Remember, Meyer is a wildly popular speaker.  So, if even she fails to examine her beliefs critically, how can we expect her followers to do the same??  (After all, they don't need to, because she has "studied" it on their behalf!)

The final thing that bothers me, about Meyer's brief statement above, stems from the very last line, "and I believe with all of my heart, that if we complain, we remain, but if we praise God will deliver us".  This ties in with my whole point about credulity.  Let's really think about that statement for a moment.  Is Meyer saying that people who suffer only need to praise, and their suffering will end?  How about the starving children in Africa?  Do they "remain" because they "complain"?  Where is the proof of this contention?  I'm sure it's a comment that appropriately challenges her audience, and hey I'm all in favor of helping people improve their attitude...but I'm noticing, more and more these days, that Christians make some pretty wild statements without simultaneously feeling the need to provide even the slightest hint of evidence to back them up (and they do it with alarming regularity).  It's not Christians who have changed; it's me.  Funny how I just never picked up on such statements while I was still a Christian myself.

And notice that Meyer also says she believes it with all of her heart.  O.k., sure, but does that make the claim any more or less true?  Too often Christians confuse the feeling of certainty with actual proof that would count in favor of whatever it is they're so certain about.  Modern science clearly demonstrates otherwise.

Now, liberal Christians will want to protest, at this point, perhaps claiming that the Exodus story is some sort of metaphor.  After all, surely modern day people can still learn a thing or two about grumbling from it.  This is true enough, in so far as it goes, but keep in mind that Meyer and her ilk believe every word of the story to be literally true.  They believe the same about Adam & Eve, the Flood, and any other number of wild tales that have all been soundly debunked.

The truth is, we could use pretty much any book in essentially the same way that Meyer is using the Bible here.  She might as well be up there extracting bits of wisdom from works of Shakespeare or "Pilgrim's Progress" from week to week.

The Bible is either "God's word" or it isn't.  My contention is that an objective look at the evidence points strongly to the latter conclusion.

The only catch is you have to actually step outside of the Christian bubble to see it for what it is.
Posted by Respectful Atheist at 22:04