Faith, Doubt, And The Power Of Positive Thinking

A loose acquaintance of mine recently got into a bad traffic accident.  You might call him a "friend of a friend of a friend"; we don't really know each other, very well, but we travel in similar circles.

Unfortunately, it appears as if he may now be paralyzed.  Obviously, it's a tough situation but, from what I hear, he is maintaining an extremely positive (even cheery) attitude in the hospital. For the record, and lest I be accused of implying otherwise, I think this is downright awesome. There is a great wisdom in learning to accept those things, in life, that we cannot control.  It reminds me of a saying that my mother taught me, when I was younger;

I now realize that this is what's known as the serenity prayer but, as a kid, it just seemed like another one of those deep things my mom said (she said a lot of those).  Of course, today, as an atheist, I no longer believe that it's god who grants serenity.  The truth is, it comes from within us.

A few days ago, I became privy to an update on this acquaintance of mine.  The message, in part, read as follows...

"...(he has) inspired many with his faith and total trust in the Lord as he seeks to honor Him while clawing his way back.  The most beautiful part of this is the fact that he knows the Lord has never changed in the midst of this."

As I was reading the update, and the above section in particular, it hit me that Christians routinely confuse the ideas of faith and positivity.  In the mind of the Christian, persistent faith and trust in god, even in the face of great tragedy, is equated with internal strength and fortitude.

In similar scenarios, you will often hear believers speak of how so and so has been a real "witness", to the doctors and nurses.  In other words, their positive attitude has caused the medical staff to wonder about (or even envy) their Christian faith.  This is part and parcel to being "salt and light", to "the world", a great source of pride for the believer.

But, let's suppose, for a moment, that you or I were to become suddenly paralyzed (or we received some other devastating medical diagnosis).  We would be faced with two basic cognitive choices, in the aftermath of such terrible news: a) believe that god has a plan and, as such, that we were paralyzed "for a reason", or b) believe that we were paralyzed simply due to a freak accident (no plan, no reason, it just sucks).

It seems clear, when reflected upon in this way, that many would admit it's probably easier (at least for most people) to believe that their paralysis (or what have you) is all part of god's ultimate plan in some mysterious way.  If this is the case though, than why is maintaining faith in god viewed as a sign of strength in such situations?  Wouldn't losing your faith actually take more strength, according to this same logic?  After all, then you would have to fully admit that it's up to you, to make the best out of your really difficult situation.  No miraculous healing will come, and there is no grand plan from above.

At this point, one might be inclined to see the latter option as depressing.  Is it even realistic, to expect that someone could maintain a positive attitude, while viewing it in this way?

Yes.  I'm certainly not claiming it's easy, but many have proven that it can be done. 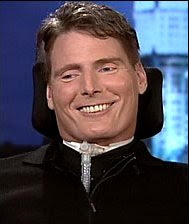 Allow me to offer up Christopher Reeve, as just one shining example.  I greatly admired (the late) Reeve, for displaying to the world a stellar attitude, despite his significant health challenges.  I have nothing but the highest respect for those who, like Reeve, steadfastly refuse to feel sorry for themselves. Incidentally, Christopher Hitchens handled himself with a similar grace, during his final days.  I think it's pretty clear that strength comes the inside, as I have claimed, and it actually has nothing to do with the supernatural at all.  Having said that, I do think that believing in god can make it much easier for someone to come to terms (internally) with such tragedies. I don't fault Christians for this.  I understand the appeal, of believing as they do, in particular since I once believed it myself.

All of this does imply, however, that religious belief acts as something of a crutch, or at least that it provides great emotional comfort, since it infuses meaning into things which would (otherwise) seem senseless and random (making them feel even more tragic). It's one of the factors that makes faith so prevalent, and difficult to shake off, especially for those experiencing a lot of hard knocks in life.  Staring reality square in the face can be pretty daunting. Incidentally, I've written a little already about how (I believe) faith acts as an emotional coping mechanism, right here, but it's a topic I will likely return to again and again.

For now, let's circle back to the question I started with; why do Christians equate faith with internal strength?  I think the answer is found by taking a step back to examine, more broadly, how Christians see the world from the outset.  When they trumpet the fact that so and so continued believing, even after something admittedly awful, what they're really saying is that he or she persisted in their faith despite evidence that might seem to suggest the contrary.  In other words, they're continuously affirming, to one another, that even though such and such may *seem* random (or meaningless), it's really not what it seems.  It's akin to saying, "our in-group believes that god has all things under his control, so we're going to esteem you verbally, for still believing in that, despite what you're going through right now".  It is for this same reason they will often admonish one another, with faith affirming platitudes such as "keep the faith!", as if doing so were just inherently a good thing.  This assumption, that religious faith is always good and right, by its very nature, is simply never challenged inside the Christian bubble.

My goal, in this post, has been to untangle the concepts of faith and positivity.  As it happens, I think the same sort of confusion exists, on the flip side, regarding the concepts of skepticism and negativity (or cynicism).  I consider myself to be a skeptic, and proud of it, but I am not a "negative person", nor am I cynical in any way (admittedly, I can be sarcastic sometimes :)). Doubt is not a bad thing, it's a sign of intellectual maturity, so a skeptic should never be accused of bringing negativity into a discussion (simply because they have introduced doubt into the given equation).
Posted by Respectful Atheist at 12:08